Setting up an online business is a snap compared to the work involved in building a brick and mortar company. So I figured we internet companies could learn from Ann Siner, the woman who built My Sister’s Closet, a chain of designer consignment stores.

Read on (and listen to the full program) for some of the lessons Ann learned as she built 11 stores with $11.2 million in revenue. 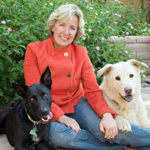 Ann Siner is the CEO and founder of My Sister’s Closet, where stylish women buy and sell designer clothes and accessories. The company also owns, My Sister’s Attic, which features home furnishings, Well Suited, which specializes in men’s clothes, and Small Change, which consigns and sells recycled kids’ stuff.

6 Lesson From This Program

1. You don’t have to invent your business ideas

Ann got the idea for My Sister’s Closet from visiting a similar store in San Antonio, Texas. It opened her eyes to how stylish and chic a used clothing store could be. So she brought the idea back to Phoenix and opened her first store.

A while back I created a list of the way past Mixergy entrepreneurs came up with their business ideas. Most did something similar. They took an idea that already existed and made it their own.

2. Before you have customers you have friends.

Because Ann’s vision was to sell used clothing on consignment, she couldn’t fill up her first store with clothes bought from a wholesaler. When I asked her how she got her first inventory, she told me that her friends opened their closets and found clothes to bring into her store.

This is similar to what Jon Bischke told me he did to get the community started on eduFire when he launched it. He asked his friends to kick off the conversation on his site and help create an active, thriving community for new people who discovered his site.

There’s a myth that only single men in their early 20s can start a company. Ann launched her company when she was 32. She told me her previous years of experience as an employee made her a better entrepreneur.

I talked about this myth in my interview with Owen Byrne, the developer who was hired to create the first version of Digg.com. He’s an older developer who was left out of the Digg story to make way for a PR story that fit our expectations of a young entrepreneur who whips up an internet company that becomes an instant hit.

Despite last year’s bad economy, Ann’s sales grew over 20%. Her business is built to do well in bad times. It sells brand name items at low prices because they’re used, so recessions can actual help increase sales.

I don’t think I’ve ever interviewed another entrepreneur whose company benefits from a recession. If you know of any online companies that do well in bad times, email me about them.

Her first store was called “My Sister’s Closet,” a name that women loved because it was reminiscent of how fun it could be to share clothes with a sister. Obviously men don’t have the same association, so Ann created a separate brand for them, called “Well Suited.” She did the same thing for kids with Small Change, and for furniture with My Sister’s Attic.

I interviewed Matt Mickiewicz of SitePoint, he told me when he spun off the design section of his site into a new business called 99designs, it took off. Before the spinoff, his design customers were turned off by all the tech talk on SitePoint. The spinoff allowed him to communicate a clear message to each customer.

6. Take time to yourself

I usually do my interviews at 11AM Pacific, but Ann wouldn’t do an interview before 11:30, which was fine with me, but I was curious about why the half hour matter. In the interview, I  put her on the spot and asked her about it. She explained that she always took time to herself in the morning. Setting that time aside helps her enjoy her day, and often leads to new ideas that she wouldn’t have come up with at her desk. (Haven’t you found that too?)

If you read my bio, you know that I lost my energy when I ran Bradford & Reed because I spent years working non-stop. I used to think that breaks were for people that couldn’t keep up. After talking to entrepreneurs like Ann, I’m realizing that breaks can bring out the best in me.

– You’ll hear details of how Ann built her company with her sister and co-founder.

– You’ll see me get a little personal with Ann so I can give you a more complete understanding of the entrepreneur behind the company.

– You’ll learn how Ann convinced a landlord to give her space when she was new and unproven.

Master class course
Create products people want (By building in increments)
How Russell Brunson solved the biggest challenge of online sales
How Zee Ali went from selling cigarettes in the hood of Chicago to selling...
LeadPages founder on why you should be embarrassed by your first launch
Magento founder Yoav Kutner on open-source products
How does a founder driven by creativity build a profitable company?