I didn’t interview him because he won the Apprentice’s second season and got to work for Donald Trump. I interviewed Kelly Perdew because people who work for him or heard him speak since he became CEO of RotoHog.com kept telling me that he’s someone “you gotta meet.”

After talking to him, I can see there’s something very ordered and determined about the way he thinks about business. It’s inspiring. (Even our interview was easy to edit, because he never went back on an answer or went off on tangents.) 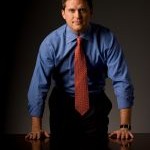 Kelly Perdew was the season 2 winner of The Apprentice. He was involved in multiple real estate projects and founded new business with Donald Trump. Kelly is currently the CEO of RotoHog.com.

Here are some of the notes I took while we spoke.

Ranger School – Kelly almost didn’t finish Ranger School because of what happened on a 12-mile, forced march. It was during an especially grueling part of the program when he was being deprived of food and sleep. His leg was cramping and he couldn’t keep carrying his 80 pound rucksack, but he was required to finish the march. That’s when his Ranger Buddy took Kelly’s rucksack–in addition to his own–and helped Kelly finish the march. He now has an intense sense of teamwork.

Commander’s intent – In the military, you can’t predict every possibility, so you can’t give step-by-step orders. Commander’s Intent explains the purpose and goal, but gives soldiers some leeway to achieve them. The same technique could be used in an unpredictable business.

But plan – After hearing Kelly describe Commander’s Intent, I asked him if that meant that planning was old fashioned. (It’s a question I’ve had every since I interviewed Rosalind about how she built her company.) He said he wouldn’t have won the Apprentice if he hadn’t set specific plans for every member of his team. He told me that we needed to set plans, but to give people some flexibly to achieve them.

That’s not a risk! – Imagine having your card rejected at the grocery store because your failing business is draining all your cash. That’s what happened to Kelly. So I asked him why he would ever go back to startups after that. He said, startups aren’t risky to him–the real risk is being stuck in a safe, but dead-end life. We need to redefine risk.

Got a mentor? – When his first business failed, Kelly says he hung on to it for about 6 months longer than he should have because he didn’t want to let people down. If he had good mentors and advisers, they would have helped him see the reality of the situation–and kept him from throwing good money after bad.

Trump’s fights – Ever notice how Donald Trump’s public fights happened just before the start of a new season of the Apprentice? It’s not a coincidence. After working with Trump for a year, Kelly says he learned the importance of using the media.

What are some of the most important business lessons you learned?