Over the past year, bloggers and entrepreneurs have studied Gary Vaynerchuk so they too could build killer online businesses and maybe even become famous.

AJ Vaynerchuk has been studying Gary since he was a little boy. Now AJ is using many of the social media techniques that his brother developed to build PleaseDressMe, a tshirt search engine. I interviewed him to see how those techniques could be used to grow a startup. 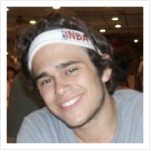 Here’s some of what I learned. (Download the full interview for much more.)

Community Before Cash – I asked AJ over and over about making money and being rich. He clearly has a business model for PleaseDressMe and revenues are coming in, but he kept telling me that cash is not his focus right now. It’s all about building the community.

Answer Every Email – Years ago I sent Seth Godin an email and got an instant response. I couldn’t believe it. He’s a guy who’s runningÂ  business and has a large fan-base and he responded to my email right away. It was a personal touch and it won me over. Gary has given speeches about responding to every email. Now AJ does the same thing at PleaseDressMe. Test him if you want.

(Listen to this interview that I did with Mark Hurst to learn how to rip through your emails quickly.)

Make It Sharable – The first time I went on PleaseDressme, there wasn’t much on the site–but every single tshirt had a “share this” button. If you want people to talk about your site, you need to make it easy for them to share it. I don’t know why bigger sites like the GAP don’t have “share” buttons on their clothes.

Use Every Social Site – Did you see the video I did with Ted Murphy? He said the same thing. Let your audience talk to you on any site they want. AJ tried doing live videos on ustream and his customers gave him an idea for selling more tshirts.

Give Bribes Gifts – AJ gives people a chance to win free tshirts if they become fans of PleaseDressMe on Facebook or if they message his site on Twitter or if they participate in his community in some other way. We talked about this technique a little at the Mixergy Viral Forum. It seems to be an under-appreciated, but powerful catalist for community-building.

Shock Customers With Service – AJ links to tshirt sites that don’t pay him a referal fee. If you can’t find a shirt on his site, he might Google it for you and send you a link to another site. He shocks people with customer service. Tony Hsieh, Zappos.com’s CEO, told me how he built a billion dollar company on this kind of customer service.

How To Build Your Brand Using Social Media – Special Session With AJ...

Master class course
Create products people want (By building in increments)
How Zee Ali went from selling cigarettes in the hood of Chicago to selling...
LeadPages founder on why you should be embarrassed by your first launch
How a list nerd grew Ranker.com to 27,000,000 monthly visitors
How Drip started as a widget and was acquired by Leadpages for a...
How getting burned by a developer inspired SD Squared Labs