On Monday, September 22, we did the Mixergy Viral Forum, and brought in experts to teach how any site can get more traffic by using viral marketing techniques. Here’s a recap of the event. 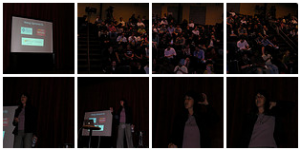 #1 “You Have NO Friends!” – If a site has a friends feature, Otis said it should integrate friends into every part of the site. That way, if a user doesn’t have any friends, she’ll keep seeing “you have no friends,” and will be persuaded to add them.

#2 Bribe Users – To get your viral marketing program going, Ethan suggested incetivizing users with bribes if they tell their friends.

#3 Hop The Bandwagon – When a story takes over the conversation online, Chris suggested incorporating it into your content. That way your site will get swept into the bigger conversation.

#4 Hire Monkeys – Neil revealed that he hired students (who he called “monkeys”) to pretend to be him on social networks. That helped him build an audience of people that he could market himself to.

#5 The Experiment – To illustrate how some of the ideas we discussed worked, Jason said that if anyone in the audience Twittered “You must follow @JasonNazar” he’d give them his Rolodex of bloggers. (See the results here.)

More, More More. We talked about many more techniques for making a site viral. These are just 5 of the most interesting ones that I wrote down.

Do you know of other ways to make a site viral? Add them to the comments or email them to me.