A couple of months ago, I was in Austin, TX for a Mixergy team meeting. (Three of my team members live in Austin.)

At the end of the day, we went to this Mexican restaurant, where April took this picture of me… 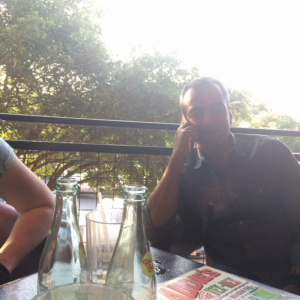 The sun was setting behind me, so it’s a little hard to tell, but I’m on the phone. And well, I’ll let April tell you what’s going on in the photo:

One of our team members mentioned that she had a brother, we’ll call him Dave. And Dave would meet up with his long-distance girlfriend, and they’d stay in separate hotel rooms every time.

Naturally, we were all curious–the guy drove all this distance, multiple times, for over a year, and they never slept together, or even shared a room?

So Andrew wanted to call him up and ask him about it. Within a few minutes, Dave was talking to Andrew, someone he didn’t know and had never met, about the details of his sex life…or as we found out, lack of it, for religious reasons.

And yesterday I asked what kinds of nosy questions YOU’D love to ask, but don’t dare, and here’s what you said:
-“Are you generally happy with your life and decisions you’ve made, or are you depressed?”–Joel

-”What do you make in a year?”–Graham

-”I wanted to ask a prominent social media expert if his work led to the downfall of his marriage…but I decided not to and kept my theories to myself.”–Brandon

Those are some good ones. So how do you ask them?

Yesterday we talked about how building rapport is my secret weapon for having deeper, more memorable conversations.

It’s how I ask the tough questions on Mixergy. And it’s how I create deeper connections in everyday conversations, like with Dave.

So today I want to give you a peek behind the curtain and share one of my most important tactics in building rapport. And it’s this:

Don’t be an emotional vampire.

When I called Dave, I didn’t just use him to satisfy my own curiosity. I was genuinely interested in his story and in his devotion to his religious beliefs.

And before I asked the more personal questions, I revealed a little of myself, too. I talked about how old I was the first time I had sex, for instance. I’d sprinkle in these personal bits about me, without ever stealing the spotlight from him.

That way, he’d feel open enough to talk to me. And he wouldn’t walk away from the conversation feeling like I drained him emotionally and offered nothing in return.

Rapport is about building a real connection with someone–give and take.

Now, this is just one example of how to build rapport to have better conversations.

Tomorrow I want to tell you about a HUGE interview mistake I see that kills rapport right from the start. It’s a mistake I made myself, before I knew better.

I’m going to tell you the story of my big mistake, and how this mistake made me sound like a needy amateur, coming up tomorrow…

(Btw, I was so disgusted with myself after I did this. Please never make this mistake.)

PS. Want to have better conversations? Or even start your own podcast?

You can get all of my secrets and strategies, learned over more than a decade and 1,000+ interviews, in my Interview Your Heroes course.

I give a lot of personal attention in this course, so I haven’t opened it for a year. If you think you might be interested, get in early. The course is closing on Wednesday, June 1.

Check it out here.

How Zee Ali went from selling cigarettes in the hood of Chicago to selling...
How stress affects a founder’s performance
Behind-the-scenes SEO and backlink strategies
An uncomfortably revealing interview with John Lee Dumas of EOFire (Live...
How does a guy who has no attachment to money make so much money?
Master class course
How to remember names (So you can build better relationships)