How Wine Library TV Is Catapulting Its Founder To Fame And Fortune.

This is the story of a guy who plugged a video camera into his computer and made himself into an internet celebrity. Then he parlayed that fame into appearances on major TV shows and ownership stakes in several internet companies.

Gary Vaynerchuk came to Mixergy and talk about how he launched and grew Wine Library TV, his high-octane, online show about wine. 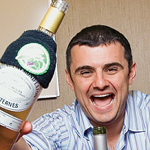 Gary Vaynerchuk leveraged social media tools such as Twitter and Facebook to promote Wine Library TV, his video blog about wine. As his viewership swelled to over 90,000 a day, doors opened to a book deal, several national TV appearances, and a flurry of speaking engagements around the world.

Edited excerpts from how Gary did it

He got inspired by watching the video pioneers

In mid-2005 my developers Eric and John at Wine Library started taking a lot of lunch breaks with video bloggers Ze Frank and Amanda Congdon. When I first saw Ze’s show, it was just very obvious to me that internet video content was going to work. And I was passionate about wine and I was going to do it. It was going to be big because I am badass and I really give a crap. And I was going to work so much harder than anybody else that there was no chance that I wouldn’t have unanimous victory over the world.

He got motivated about the opportunity

I knew I was doing something new. I knew that it would be looked back on as legacy. It’s nice to be known as one of the early substantial video bloggers. So I was just excited about the opportunity of being part of something new, crushing it, working hard, changing people’s minds about wine is very exciting to me. I wanted to expand the wine world. And you know there are so many people watching now that didn’t like wine prior to my show. That’s badass, that’s exciting.

I sent a stock boy to Best Buy because I was so hungry to get going right away.

He came back, Eric, my lead developer, turned it on, I grabbed three bottles of high end California wine and just started taping a show. And that was it.

He focused on a few new tools

I was excited to use the tools to promote the show. At the time, Facebook was a college play. I was scared to go into Facebook and seem a creepy old guy peddling alcohol, so I didn’t really leverage Facebook. Twitter was alive, but nobody knew it. I got involved a little bit later in ’06. But what really was interesting was getting involved with reading comments on blogs, and going to forums, and all the little things that I needed to do and most of all answering every email as I started to gain a small fan-base.

He put in more work than others

Here’s an example. Do you know how much emailing I did? And how much it dictated my life? And how much time it took? Enormous. Just crazy amounts.

My brother AJ would take a flight to San Francisco, we’re bros and we love each other, but I’d put on a headset to avoid distraction and the whole flight I’d answer email. So, I just cared a lot more.

I hired a PR person in January 2008. What I loved about her was that she was very ingrained in the food world. She had repped Rachael Ray for 5 years and I wanted access to the Today Show and Gourmet Magazine and those things, so I paid for access.

He got on TV for the first time

I got a Time Magazine article written about me. That was a big deal, you know, the writer really painted a great picture of who I was.

That led to several producers at Conan reading that article in Time, going online watching what I did. They thought I had “it.” They sent an email to Viddler — not even me to the site that hosts my videos, Viddler –cause they didn’t know how to get to me. Thank God Rob Sandie, Viddler’s president, sent me the email and didn’t think it was a joke.

I called them and basically I blew them away in the phone call. They called me because they wanted to see if I was legit, and the first time I ever went on television was the Conan O’Brien Show.

He turned online fame into shares and cash

I started getting pieces of equity because people started emailing me and saying “you really get this! You’re a wine guy and you get this better than our $400 million company.” Or “why do you understand Facebook and Twitter better than I do I’m a developer or I’m a web guy?” So it just came to me.

How did it start happening? My inbox started getting things like this: “Hey! We’ll give you $10,000 to come speak at our conference.” I would do the amazing business move of writing back “OK.”

– Clues for how you can build a powerful brand online.

– The opportunity that might be waiting for you in HUGE web sites that most people ignore.

#AskGaryVee: One Entrepreneur’s Take on Leadership, Social Media and...
Live