How to present your business persuasively

Do you know how to excite people when you tell them about your business?

Jason Calacanis, founder of Mahalo, is a partner in the TechCrunch50 conference, where he helped rehearse most of the 50 startups who presented. In this video (which he did exclusively for Mixergy) he talks about how to present a new product. 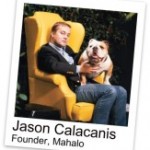 Jason Calacanis is an entrepreneur and blogger. He founded Mahalo.com and has built over a dozen brands.

Here’s the paraphrased text of what he said:

The key to presenting is showing, not telling.

When people get up on that stage, at any point, when they start talking about what their product does, I stop them.

I say, “Stop. You’re talking about the fact that the product has great search features? Show the search. Do a search for ‘Tesla’ and show that you disambiguate between Tesla the car, and Tesla the scientist, and Tesla the rock band. Show it. Don’t talk about it.”

And if you can’t show it, then your product’s not ready. I think that’s where people get caught up. Even if they have a good product, they start talking about what they’re going to build next. And they forget to talk about what they have now.

I think Steve Jobs is a good road map for this. He doesn’t talk about what’s coming. He talks about what’s here. What you can buy now.

And Howard Stern also had a key point about that. Jay Leno and David Letterman would always want him to be on their show. They knew that it would be their big night for ratings because he was so outrageous. Well, he only went on when he was selling a book, a pay-per-view, a set of CD’s, or moving to Sirius radio.

You saw him on David Letterman before Christmas two years ago. He came with a Sirius Satellite radio,Â  handed it to David Letterman, and said, “It’s a great gift. I want to suggest everybody buy this over the holidays.”

Howard Stern is one of the most famous people in media. And he’s out there saying, “hey, buy this product. I’m proud of it. I’m proud of what I’m doing.”

More from Jason Calacanis and Mahalo

Jason Calacanis, Angel
What’s The Right Mix Of Personal And Business Posts On Social Media Sites?
To Get Press, Teach. Don’t Sell
Do You “Live Your Brand?”

Master class course
Create products people want (By building in increments)
How Russell Brunson solved the biggest challenge of online sales
How Zee Ali went from selling cigarettes in the hood of Chicago to selling...
LeadPages founder on why you should be embarrassed by your first launch
How Drip started as a widget and was acquired by Leadpages for a...
How a list nerd grew Ranker.com to 27,000,000 monthly visitors