How PostSecret Uses Social Media to Grow its Mission

I used to think that Frank Warren had it easy. I didn’t think he had to do any work at all to grow his site: PostSecret. PostSecret is a collection of secrets that people write on postcards and mail to Frank’s house. It’s one of the top blogs and I thought that’s only because the idea is so extraordinary that people naturally have to talk about it.

In my interview with Frank, I learned that a lot of work went into developing his community. So I asked Frank to teach me some of what he did. Here are a few ideas that I learned (listen to the full interview to learn more, directly from Frank): 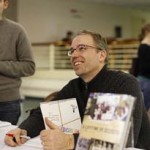 Frank Warren founded PostSecret, an ongoing community art project where people mail in their secrets anonymously on one side of a postcard.

Know the tools – I foolishly tried using every single social media site for one thing: to get more people to pay attention to my company, Mixergy. Frank uses each site differently. He uses Facebook for his event invitations because the site’s news feed makes events go viral. He uses MySpace’s blog features to interact with his readers. And he uses YouTube to co-create viral videos with his audience, based on the secrets he gets.

Live – Frank takes his community offline by speaking at colleges. He meets his readers in person at book signings. And he displays the postcards he gets at art shows.

Mission – If you listen to my interview, you’ll hear me pound Frank with questions about how he uses different tools to grow his audience. He answered all my questions and gave me good advice that you can use to grow your your online business. But when I listened to the interview again while editing it, something hit me: all of these tools work for Frank because there’s a sense of mission behind what he does. He’s not just an audience or a business–though he readily says that PostSecret is NOT a non-profit and he IS a businessman. There’s a sense mission behind what he does. He wants to give voice to the people who mail in their secrets. He wants to touch his readers. And he wants to connect with everyone who sees him in person.

Master class course
Create products people want (By building in increments)
LeadPages founder on why you should be embarrassed by your first launch
How a list nerd grew Ranker.com to 27,000,000 monthly visitors
How getting burned by a developer inspired SD Squared Labs
Building a $200k/mo digital marketing agency from the ground (using...
Master class course
How to grow your audience (Using an Ambassador Program)