Ben Huh came to Mixergy to talk about how he raised money to buy a blog about LOL cats, called “I Can Has Cheezburger,” and how he turned it into a growing publishing company that own over 20 sites, including Fail Blog and This is Photo Bomb. His network has over 11 million users and 218 million monthly page views.

I asked him how he did it and, more importantly, what YOU can learn about building a publishing company, based on his experience. 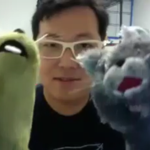 Ben Huh is the CEO of Cheezburger Network, which owns a diversified portfolio of large user-generated communities, including I Can Has Cheezburger, I Has A Hot Dog, Fail Blog, Pundit Kitchen, and This Is Photobomb.

10 Lessons from this program

Ben discovered I Can Has Cheezburger, the cat photo site, by accident. It hotlinked to his blog and Ben realized how much traffic the site had. He told me, “I thought, ‘Wait a second. If this nice guy is running such a large site, I should probably learn more from this guy.‘

“So I emailed him and I said, ‘Hey, listen, I’ve got a background in user experience. What can I do to help you pro bono?‘ So, we started our friendship online.”

#2 Expect users to be lazy

#3 Respect the value of an established brand

Anyone can create a cat blog, so I asked Ben why he didn’t copy Cheezburger instead of raising money to buy it. He said, “The reason we decided to buy it was it had a brand, it had a community, and that was difficult to create. That would take some serious cache for me to create. And I wasn’t plugged into a community. We said if we were going to create a competitor, I don’t know that it’s going to be as big.  So it’s probably better worth buying something that has actual value instead of putting money into something that has zero value and hoping it succeeds.”

#4 Real business can get done over IM

I was surprised to hear that Ben made his deal to buy Cheezburger from the founder over instant messenger. “It wasn’t for sale.  And I had an IM chat with Eric, in which I offer him sums of money, and he would say no. We did this back and forth over IM, and we agreed to a deal over a chat.”

I asked Ben how he was able to raise money for a cat blog. He said, “I told them that it was more about humor than it was about cats. There is more to this than just a cat blog. And people show up here because it makes them happy. It makes them laugh. It’s about the world of humor and its at the foray into the world of humor blogging. And that there wasn’t really a big competitor out there in this space. That it was all fragmented and that we could actually aggregate more of these sites and we could grow a big humor empire.”

#6 If you want to be a CEO, get close to other CEOs

Ben knew he wanted to run his own business, so he was selective about the jobs he took. “One of the deals I made with myself, and this is a very difficult deal to make when you have no money.  I said, I will not take a job in which I do not have direct contact with the CEO….I need to learn from people who’ve done it successfully.  I need to learn the habits and patterns and the way they think.  So, the only job I would take was not in a big company, and if it was, I needed to be the guy who could go down to the CEO’s office and say, ‘Hey, can we talk?’  And if that’s not available, I wasn’t going to take that job.”

#7 When you buy a site, don’t touch it till you learn it

He sold his investors on a vision for how big he could turn this little publishing business, but Ben told me that after he bought it, “the first thing we did was to make a promise to do nothing for 30 days.  And I know that when you take over a site, you may have ideas about what you want it to do, the things you don’t like, but we decided that we were going to leave things alone. And what we learned was, how did Eric do things, and how do we replicate it as closely as possible?”

#8 Set a schedule so your audience knows what to expect

When I asked Ben about the first change he made to the business after buying it, I expected him to tell me about a major editorial or technological change. Instead he said, “We went to a rigid post schedule. It stopped being an arbitrary number of posts. We said, ‘We’re going to set a schedule. So, X number of posts on weekdays, N number on weekends.’ It seems like a pretty small change but it was impactful.”

#9 Don’t buy one when you can buy two

I don’t have a great sound bite to quote for you on this point, but I thought it was interesting to learn that when Ben bought Cheezburger, he asked the site’s founder to build and sell him a second site about dogs. Ben’s goal was to grow the business to multiple sites and this was a reliable way to double his holdings quickly.

When Ben launches a site today, most of the technology behind is the same free software that’s available to anybody. He uses WordPress with an off-the-shelf theme. Then he grows the site based on feedback from the community. When I asked him what advice he’d give you, my reader, he said, “I think a lot of people kind of get this idea of big dreams, and they immediately want to go to a big dream, but you got to think small, you got to win that little battle. And once you win that little battle, then you can win a slightly bigger battle, and then so on and so on and so on.”

– Listen to how Ben got his confidence back up after his previous company failed. This is an issue that everyone in business has to deal with, so be sure to catch that section.

– Learn from the way Ben’s company researches, launches and evaluates each site it creates. They’re launching a couple of sites a month right now, so they’re learning fast.

– See how Ben subtly stands out at events. If you read The 48 Laws of Power by Robert Greene, you’ll really appreciate the significance of this little move.

How Cheezburger founder’s inner chatter affected his company (before...