This is part of the behind-the-scenes section of Mixergy, which I call etc. 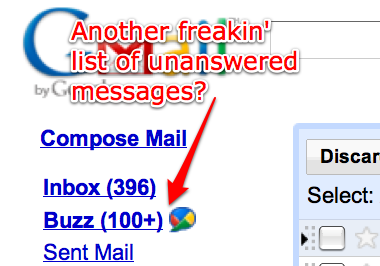 I got in this morning and, in addition to the counter that shows how many unanswered emails I received overnight, Google added another counter. This one shows me that Google’s day-old service already managed to shovel over 100 new unanswered messages into my life.

If Google cared about its users, it would recognize a major pain point for us: we have too many messages being flung at our footsteps every day, each demanding a response. If they cared about us, they might pay attention to their original mission, ” to organize the world’s information and make it universally accessible and useful.”

Instead of this new addition to our burden of unread messages, they might have found a way to organize what we already get and make it more useful. Maybe they could start by finding ways for us to sort email by importance, instead of by date. Or maybe by some other Googly, algorithmly way that I couldn’t even begin to fathom because I’m not Google and they’re the experts at data management. It’s what THEY do better than anyone in the world, even today’s “cool kids” Facebook and Twitter.

So, why isn’t Google doing this? Because they’re looking at the cool sites and noticing how deeply they’ve woven themselves into our lives and they want to be like them. In other words, instead of playing to Google’s strengths, it’s giving in to Facebook-envy and Twitter-envy.

Maybe I’m wrong. Maybe they’re not doing this to be cool. Maybe their goal is to find a way to figure out who your friends are so they could improve your social search results. Hey, I can get behind that. I can see how getting search results based on my friends’ preferences would be better than getting results that are sorted by which site knows the most SEO tricks.

But to do that, can’t they take the friends I already have on Facebook and Twitter and every freakin’ other site? The data is already there. Can’t they focus on doing what they do best: Taking information that’s already out there and organize it.

This post my seem like the ranting of a mad man, but check my logic by asking yourself this question:

When you got up yesterday, were you more bothered that people couldn’t share enough information with you or by the growing pile of messages that you’re already getting?

One day someone will solve the problem of data overwhelm. I hope it’ll be a Mixergy entrepreneur because Google is busy with other things.

Cameron Herold coaches me on hiring (so I don’t collapse at my desk)
When does a startup founder need a COO?