Making Your Own Luck [Clip]

I was so inspired by this section of my interview with Laura Fitton, founder of Oneforty, that I clipped it for you. The transcript is below, the full interview is here.

One of the most important things that influences my life was a mistake I made when I was seventeen.

I was sitting at home. My parents were away for the weekend. I had a passport. I had about $450 in my bank account. And it occurred to me, as I watched the Berlin Wall get torn down — yes, I am that old — that I really wanted to dance on top of the wall. Because that was such an emblem in my childhood of hate and oppression, and the fact that the Russians were going to nuke us at any minute. And people were being shot in No Man’s Land.

Psychologically, that was huge, seeing that wall come down.

I thought about going. I called the airline. I had the money. I could have gone, and ultimately, I didn’t.

About six months later, I told someone the story. And he’s like, “You are crazy, you. That’s a gift that stuff like that occurs to you to do.” He’s like, “Most people don’t have the idea. So, they don’t go because it never occurs to them to go. If you’re having ideas like that, you have to act on them.”

And that really, because I screwed up and didn’t go to the Berlin Wall, I have a very strong bias to action. When an idea does come to mind, and maybe it’s a little goofy, but it’s not going to hurt somebody, you never know what the result might be, but it will probably be interesting. I absolutely, I think nine times out of ten I do commit and say “yes” and do it. And that one thing has definately opened a lot of what’s happened to me.

Just being able to scan the horizon and see when the luck occurs. My superpower is that I’m lucky, but it does help that I’m probably looking for it more than most. 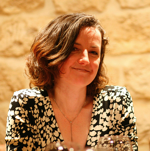