Can you imagine having a community of fans that’s so passionate about what you’re doing that they tattoo your image on their bodies? I interviewed Keith Malley and Chemda Khalili because they built that kind of community and I wanted to learn how they did it.

In 2005 they plugged a couple of mics into a computer and created an internet radio show called “Keith and the Girl.” They launched it on their own, but their community grew the show by promoting them, helping them buy better equipment, writing their press kit, and pitching in however they can. 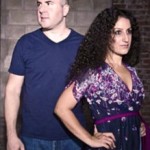 Keith and The Girl

Keith and The Girl

Keith Malley and Chemda Khalili are co-hosts of Keith and The Girl, a daily comedy talk show podcast.

Here are some of they ways they built their community:

Forums – In his book Tribes, Seth Godin says that if you want to build a community, you have to let members talk to each other–not just listen to you preach. Keith and Chemda did that by adding a simple vBulletin forum to their site.

Emails – They read every single email they get. Guy Kawasaki, Apple’s former evangelist, says to build a community, you have to support your “thunder lizards,” your most passionate people. If someone takes the time to write in, they’re signaling that they’re probably a thunder lizard. (If you get too much email, this interview will help.)

Filter – On the internet, there’s a philosophy that every voice should be heard. If you take that openness too far, you get a chaotic mess. As much as they love and appreciate their community, Keith and Chemda filter what makes it on their show.

Meetups – I keep hearing about the importance of in person meetings when I interview online community organizers. They make a web-based community feel real. Keith and Chemda encourage their listeners to organize meetups on their forums.

Evangelists – I’ll let you in on a little secret. You might have noticed that Microsoft has been a big supporter of my events for startups. It’s because they have evangelists who are paid to encourage startups. Keith and Chemda don’t have the budget to pay evangelists, but if they see that someone is creating an event around their show, they sometimes surprise them with free Keith and the Girl merchandise to help them.

Excitement – Keith and Chemda have done their show live at different cities around the world. From what I can see, there’s no real profit in these events, so I asked them why they do it. They told me that they work hard to keep giving their fans something new to look forward to. It helps build excitement among the community for their show.

Ask – The best way to get a community to pitch in and help you grow, is to ask for help. Keith says that people want to help. You need to give them a way to do it.

Update: Read Jeremy’s comments below. He explains how the community started.

What other ways are there to grow a community? I’m researching this subject pretty heavily. Please share your ideas with me by email or in the comments.

How Zee Ali went from selling cigarettes in the hood of Chicago to selling...
LeadPages founder on why you should be embarrassed by your first launch
How a list nerd grew Ranker.com to 27,000,000 monthly visitors
How Drip started as a widget and was acquired by Leadpages for a...
Building a $200k/mo digital marketing agency from the ground (using...
Master class course
How to grow your audience (Using an Ambassador Program)