Check out the way Groupon bought the domain Groupon.com. When the service launched it was on Groupon.ThePoint.com because they didn’t own Groupon.com.

I excerpted the video & transcript from my Groupon Interview with Andrew Mason (which is one of my best, so I hope you check it out).

The guy who actually writes all the content had the idea for the name and its like the perfect name [“Groupon”].

We emailed the people that own it and said, ‘Hey, are you interested in selling?’

At that point, we had no idea where [the business was] going. We went and worked on the project. We got some momentum.

A couple months in, we emailed again and said, ‘Hey, are you interested in selling?’

He said, ‘No, definitely not.’

We said, ‘Just curious, what are you planning on doing with it?’

He said, ‘Well, I live in England and I’m interested in, at some point, starting a group coupon service, where somebody would be able to buy a coupon that, if they bring four people into a restaurant, all five of those people would get a discount.’

So, it’s like a slightly different take on the group buying, group coupon model.

We said, ‘That’s interesting. We’re doing something somewhat similar to that in the United States, so, maybe we can work together on this. We can take this to Europe.’

Then we had a trademark for Groupon. That trademark extended to England.

We contact him and say, ‘Hey, you can launch that thing, but you can’t use the name Groupon because we have a trademark on it.’

So then, he decided he wanted to sell.

Continue to the full interview >> 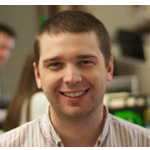